Curtis Magee lives in Coleraine on the beautiful North Antrim Coast of Ireland, although he originates from the border town of Strabane in County Tyrone where he attended the local primary & secondary schools.

His father Lexie passed away in September 2009 and his mother Mary now resides in the family home in Castlederg in County Tyrone.

Curtis is the only son and has two sisters Pauline and Diane.

Music has always been at the heart of the family, his late father Lexie had his own Showband called “The Starbeats” in which he played saxophone and clarinet.

It doesn’t stop there however, because he also played the accordion, fiddle, harmonica and the bagpipes. Lexie was in fact a pipe major to many local bands in the area so it’s  not hard  to see where Curtis got his love and talent for music from.

Although we all know Curtis for his ability to play the keyboards, accordion and guitar but in the early days his ambition was to be a drummer, where he spent many hours practising on his father’s old show band drums which were set up in the spare room at home, where he played along to records of his boyhood favourites

Now Curtis often shares the stage with these stars  a dream come true you could say!

At the age of seven along with sister Pauline they both attended piano lessons where they learnt to read music and took several examinations, which they both passed with flying colours. A few years later at Christmas, Curtis became the proud owner of his first guitar. He was a little disappointed at the time because he had hoped for a Manchester United football kit. So with guitar in hand and Pauline in tow again it was off to guitar lessons and his introduction to world of country music. 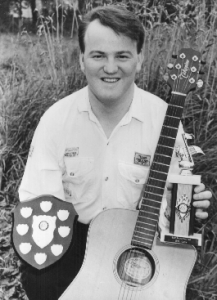 Curtis kept nagging his father Lexie a bus driver at that particular time to buy him his first electric guitar, amplifier and speakers and after many months of persistence Lexie finally gave in and set off on his bus one morning to return with the much sought after equipment.

So Curtis was up and running and looking for work at the tender age of twelve.

The Welcome Inn Bar in Strabane where Curtis was to play every Saturday night.

It was not long before another such booking came in but this time for a Friday night at Paddy the Butchers pub just around the corner. Curtis could always have a laugh at his school friends who spent their weekends collecting shopping trolleys at the local shops for a few bob, whilst he got a lot more for singing a few songs.

It was this entertaining as a solo act which gave Curtis the notion to have his own band, so along with two of his school friends they started their own band, which they called “Country Cream”. As the lads were too young to work the pub and club circuit, work was hard to come by and they settled for entertaining at church hall socials.

They enjoyed playing to a captive audience but as these functions didn’t pay any money their only reward at the end of a hard nights work was a cup of tea and a cream bun.

Around this time Curtis was bought his first accordion by his late uncle Johnny.  Lessons weren’t necessary this time because the talent was already well enough set in to enable him to teach himself.  This accordion is the one you see alongside Curtis on the stage today and is unlikely to ever change because of its great sentimental value. 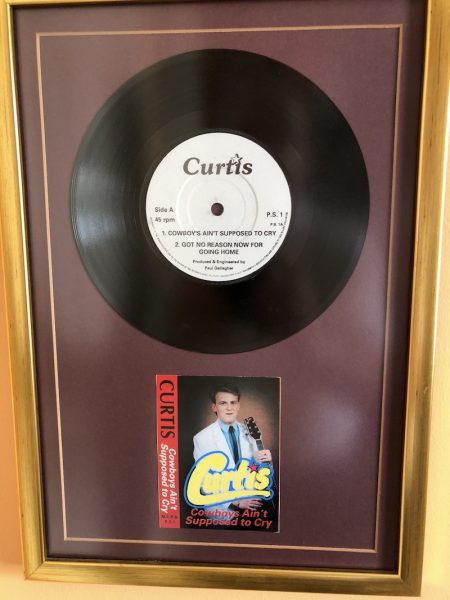 Curtis left school with an O level in music and many dreams for the future.  It was necessary however, to bring in some steady money and he took various jobs in shops around his home town of Strabane, where he worked his way up from store man to shop assistant. During his time he played rhythm guitar part time in another band called Eugene and the Mountain Ramblers, he later formed his own band with drummer Barney Forbes called Curtis & Barney, in which he played keyboards.

This band became a popular name at many local social gatherings, weddings and dances throughout the area.

It was such a huge success that within two years the second album was on sale this time entitled “On The Road Again” With the need for a third album, Curtis made the brave decision to hang up his shop overalls and go professional in 1990. At this exciting time with album number three entitled, “Irish Favourites” topping the charts, he embarked on his first overseas tour.

His travels took him first, thanks to the help of Scottish promoter Ann Carmody in Inverness, to the Scottish Highlands.  It was a real success and Curtis brought the house down in every one of his performances. He was immediately rebooked for another tour the following summer this was designed to coincide with the Inverness Country Music Festival and Curtis’s first appearance at a major festival. 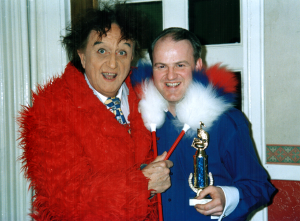 This was also a show stopper for Curtis and it just so happened that compering the festival was a gentleman by the name of Mr Tony Best.

Tony was one of Britain’s top country promoters and he was so impressed with Curtis’s performance that he invited him on a tour of England and Wales the following year 1992.

This tour took Curtis to places throughout England and Wales where he enjoyed his first experiences of audiences south of the border. The first date of this tour was at The Presthaven Sands Holiday Centre in Prestatyn North Wales.

His first English appearance was at The Woodborough Social Club in Wiltshire, to say that Curtis went down well is an understatement because from that one appearance he was to win their solo act of the year award for 1992.

His travels on that first tour also took him to places as far away as Bampton in Devon and Whitchurch in Shropshire to his first TBL event at Cayton Bay in Scarborough, where he was to perform in front of a thousand country music fans.

Curtis was absolutely overwhelmed by the response he received and completely sold out of merchandise when it was time to go home.

1992 does in fact, rate as Curtis’s most significant year to date. It was also the time  he met with Terry Corrigan of TC Records in Dungannon, who has to take the credit for the success of Curtis’s numerous recordings to date.

Curtis has recorded a variety of different albums which include Country and Irish Songs, Singalongs, Country and Gospel Songs, Christmas Hits and Instrumentals.

There are over thirty CD’s and more than a dozen DVD’s available.

Since those heady days of new introductions and great openings for this talented entertainer he has become a frequent visitor to the UK and he also enjoys regular visits to the sunny climates of Spain and Portugal.

It is not surprising to know that this success has gained him many awards at various prestigious clubs and venues throughout the UK. These accolades include Solo artiste of the year and Solo entertainer of the year.

There are far too many to mention them all but it would be fair to say that Curtis is most proud of his achievement in winning the Lazyacre Country Music Club in Shrewsbury, Soloist of the year award ten times, one of these awards was even presented to him by the late Ken Dodd.

Since those early days in the music business, Curtis continues to be one of the busiest entertainers on the roads of Britain and Ireland. 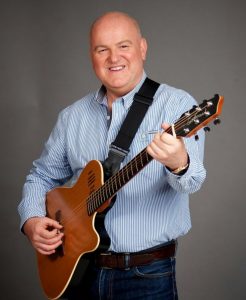 For nearly thirty years Curtis has preformed at the Aul Lammas Fair in Ballycastle Country Antrim, and in earlier years his eldest daughter Natasha  joined him on stage raising over £20,000 pounds for Cancer Research in Northern Ireland.

Curtis has two daughters Natasha and Shannon who like their dad seem set to follow in his footsteps and create another generation of Musical Magee’s.

In November 2004 Curtis visited Australia and America for the very first time,

He played at venues in Melbourne, Brisbane and Sydney, also taking in Singapore and the Fiji Islands. This was a chance for Curtis to get his style of music across to a new generation of fans.

In 2006 Curtis for the first time took his place on a Mediterranean cruise visiting Spain, France, Morocco, Tunisia and Italy.

A well travelled man by all accounts.

Curtis also runs his own Fanfayre every June in The Lodge Hotel in Coleraine.

He is joined by his fans, friends and family from all over the UK and Ireland,  for 4 days of non stop musical entertainment and sight seeing tours of the beautiful

He is also joined on stage by many other artistes in the music business, plus his lovely daughters Natasha and Shannon.

Curtis’s philosophy is simple, give the people what they want and send them home happy as they continue to dance and sing-along to what has made him